I’m learning more about how to run DMX data from the computer out to the light controllers (dumb RGB).  I have found a promising USB adapter which can communicate with Xlights 4 software.  What is awesome about this adapter is the price.  As pictured it can run for around $25 with shipping.  However, it requires both an enclosure and an RJ45 female connector (not included) to be soldered to the board.  This pushes up the price a little, but to the hobbyist it is a good value to start with. 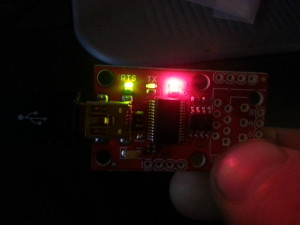 Potentially this adapter can run 512 channels of DMX from most any computer with lighting software.  This USB adapter could be less expensive than purchasing the leading brand of professional DMX adapters, typically at $50 up to $100 or more!  I’m currently in the process of housing this adapter and making it available to other hobbyists.

So WHY am I testing a USB adapter?  Well, I’ve been testing a multitude of adapters with marginal success at best.  I want an adapter that will go from my windows XP computer to my Win 7 or Win 8.1 desktops.  Many of the adapters I’ve ordered over the past month have not done this successfully.  However, the higher cost DMX adapters all seem to work on every computer in my arsenal.  This USB adapter (pictured above) seems to work on all my different OS platforms.  I think I’ve found the common thread as to why the others did not work.  If you are interested, please continue to read  🙂

The Back Story:
I began testing out different USB devices around 2 months ago.  I was first excited when I found some USB adapters on Amazon Prime and Alliexpress that worked great on Windows 7.  But, the same adapter did not work with Windows 8 or 8.1.  These adapters cost anywhere from $8 – $20.  It took some digging, research, and a whole lot of time to learn what was going on.

My quest to find an inexpensive adapter for Light-O-Rama began in 2013 with the purchase of a $15 USB to RJ45 serial adapter.  I was not so “schooled” in such devices and I could never get it to work for my intended purpose.  So, this unit went into the junk drawer and sat for over 2 years!  Last month, December 2015, I connected this device to the USB port and Windows automatically downloaded/installed the driver.  I changed some settings, fired-up Xlights 4, and pressed “output to lights”.  Bam, the DMX controller was receiving signal from this adapter!  However, my excitement was subdued when I plugged into my current main desktop computer, Windows 8.1, and the device did not work at all.

What (or Who) is behind this?
In both cases, the driver was automatically downloaded and installed by Windows Update when the device was connected to the USB port.  This driver is owned by a company called FTDI.  FTDI is a manufacturer of micro processors.  The driver assigns an ID to the device, as well as a unique “comm port”.  This ID is saved in the FTDI chip.  Once this comm port is assigned, the computer can send data out to various remote devices.  In my case, it carries DMX signal out to the DMX controllers.

Episode IV: A New Hope!
When an overseas manufacturer wants to compete with a US product they may try to duplicate the micro processor to cut costs.  If they can clone the FTDI chip and use the already-available FTDI driver, they wont have to pay for a license and signed driver through Microsoft.  Many manufacturers were able to duplicate such a chip, and began selling them in all sorts of devices now found on eBay, Amazon, and countless other online vendors.  The prices of these devices usually is much cheaper than a device with a genuine FTDI chip.  And, in most cases, the consumer has no clue as to the authenticity of the components included with the device

Episode V: FTDI Strikes Back!
FTDI is a private company who pays Microsoft a very pretty penny to have their drivers “signed” by Windows.  Having a device with a true FTDI micro processor allows the end-user to connect their device to multiple computers.  This means they can go from a computer with Windows XP, to a Windows 10 system and not have to worry too much about the driver.   Their genuine chip generally works with all windows computers.  Because of the flexibility afforded to the end-user, the micro processor manufacturer can charge a premium for their genuine chip.  This premium is passed on to the consumer by way of a more expensive device.

FTDI began combating the growing issue of counterfeit micro processors with the release of a  driver (v2.12.0.0) in July 2014.  This driver update was able to render a cloned or copied FTDI chip useless by assigning it a zero-value.  This is known as “bricking” or “soft-bricking”.  Anytime that same chip is connected to another computer, the FTDI driver would see this zero value saved in the micro processor and ignore the fake chip.  With a useless device in-hand, consumers were angered!

Episode VI: Return of the Consumer!
This action by FTDI affected the end-user greatly.  One day your device worked just fine, then after a Windows Update your device would stop working.  Users considered this an unethical business practice by FTDI.  People felt their device was sabotaged and believe FTDI had no right to modify their personal property.  Besides, how is the consumer to know the difference between a genuine chip, or a cheap knock-off?

FTDI back-peddled and replaced the driver with a new one that only allowed communication with genuine FTDI chip.  Supposedly the user is to have a warning displayed which states the device can not be supported.

I have several different USB devices that claim to have an FTDI chip.  Some of them worked perfectly on my old Win7 computer with a driver listed as pre-July 2014.  However, they do not work on my current Win8.1 desktop.  I have not received any notification from Window saying my chip is “fake”, but I do know that the device does not work with the most recent FTDI driver (v2.12.12).

Why the long Post?
If you have read this entire report, then you are more than just my average visitor.  Maybe my experience can help you make an informed decision.  If you do purchase an inexpensive USB to DMX adapter from eBay, Amazon, or any other vendor either foreign or domestic, you will have been warned.  While I had a number of successes, many of cheap FTDI-chip devices failed to work.

As I said earlier, I’m hoping to produce a reliable and inexpensive solution for new people getting into the hobby.  I hope to spare you the grief when making a decision to purchase a cheap solution to run your RGB DMX lights using a computer with a Windows operating system.

At this time, I’ll note that I have not tested these devices on a Linux Operating System.  Apparently these devices are not as volatile on an OS other than Windows. Many people have claimed they work just fine on Mac as well.  Let the buyer beware.

Below are some of the resources I’ve read through over the past 18 months.  Please forgive me, I have forgotten some of the earlier sites I’ve researched.

FTDI Screws Up, Backs Down