While the summer rolls on, and the feeling of winter is just so far away, the display is always on my mind.   This week I’ve been reading about some of the other folks in the lighting hobby, and their plans to improve their setup for the 2017 year.  One of the subjects brought up was the ease of testing your display using your iPhone (I’m an Android user).  Another user asked if anyone else had used a (high-end) Microsoft Surface.  This got me thinking about testing my own props while in the display.

When I begin installing the props, my least favorite part is testing the roof layout. From my show computer I continuously run a test sequence. There have been times I can’t figure out why something is not working, and I have to climb back in though the window only to find I didn’t sequence a prop. Not to mention, sometimes the network cables are not all connected and the controllers may not be receiving e1.31 data. Having a touch-screen tablet would be nice for times like this when it’s not so easy to get to the show computer. A new Microsoft Surface tablet is just wayyyy out of the question, and I couldn’t justify spending $200+ for another computer that served only one use. So, here is my solution.

Most people won’t have an old (2007) Windows tablet laying around, but I happen to have purchased one from eBay (around $30) back in 2011 to use in college. It is a Fujitsu Stylistic 5112 tablet with a Core Duo 1.2gh (first gen duo) processor, 1gb RAM (ugh), and a 230GB HDD. I loaded an educational version of windows 10 (32 bit, not activated) via a USB thumb drive. The first issue was that I couldn’t see the sequencing program’s (xLights) layout when previewing a sequence. After downloading the Windows 7 driver for the video adapter from the Fujitsu site, xLights worked flawlessly. 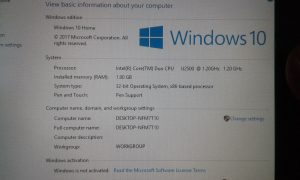 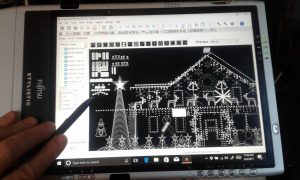 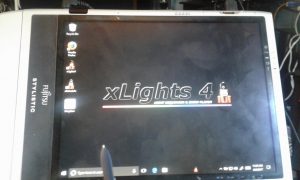 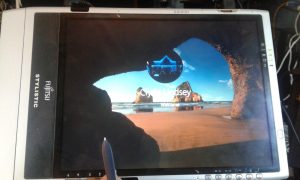 It was painstakingly slow to load Windows 10, install and download my 20GB of Dropbox files (for my show only), and install all the device drivers for the tablet. I’ve placed an order for the maximum 4GB RAM upgrade through ebay, a whopping $24. In the future an SSD might make a nice performance improvement. In total, I paid $54 to make this tablet work as a display setup aid.

While I haven’t used the table very much (still downloading my drobox files), I have learned there is quite a lot to love about using it with xLights. First, this table is not a finger-touch screen. It requires the tablet’s stylus in order to interface with Windows. Now sure I could use a mouse, but I actually enjoyed using the stylus to click and drag the effects. I was able to be quite precise with my exact timing when adjusting effect start and end times. The tablet also has a VGA monitor output so I can add a second display to utilize the tablet’s full screen.

I also learned I rely heavily on a keyboard for shortcut keys to add on-the-fly timings. The on-screen keyboard works great, but is in-the-way when opened. However, the lack of a tablet stand leaves it more challenging to position the tablet and keyboard in a productive manner. I also found that adding timings into the sequence was not as intuitive as with using a mouse and keyboard. I also realize this table is quite bulky… it has some weight to it. With the large dimensions, 13.5″ x 8.5″ x 1″ thick, it takes up a bit of space. While I find it comfortable to hold in my lap while relaxing in the living room, it will be a much heavier to hold than a modern-day table (which is probably much faster and efficient).

I realize many of you will not be inclined to spend your busy display prep time on building a from-scratch Windows tablet. Heck, it is hardly reasonable that I spent the time doing it myself with so many other things that I could be working on. But, if you enjoy playing with computers (as I do), and fancy a project like this, eBay has other tablets you can pickup for about the same money, with the same or better specs.